On August 14th 2019, Pakistan celebrated Independence Day. Here is a list of some major highlights during its 72-year existence…

1947: On August 14 Muslim Pakistan comes into being from the partition of India at the end of British rule. Liaquat Ali Khan is appointed first Prime Minister. India became an independent state one day later. Two provinces, Punjab and Bengal were divided along religious lines. Punjab’s mostly Muslim western part went to Pakistan and its mostly Hindu and Sikh eastern part went to India. Rioting in the Punjab forced the governments of India and Pakistan to agree to a forced population exchange. Around 10 million people migrated across the border and anywhere between 200,000 and 2,000,000 (the majority of them Muslims) died in the subsequent violence.
University of Sindh established. This was the first university formed in Modern Pakistan. The country’s oldest institute of higher learning is the University of the Punjab, established in 1882 in Lahore.

1948: Urdu is declared the national language of Pakistan; Pakistan’s first postage stamp is issued; State Bank of Pakistan established; Pakistan’s founder and first governor-general, Muhammad Ali Jinnah, who is revered as the Father of the Nation, dies of tuberculosis.

1953: Pakistan produces its first vehicle at the National Motors plant in Karachi, in partnership with General Motors. GM arranged the facilities for the production of Vauxhall cars and Bedford trucks. Subsequently, buses, light trucks and cars would be assembled at the same plant. Later in the year, Ford Trucks partnered with Ali Automobiles to manufacture the Ford Anglia, Ford Pickups and the Ford Kombi.

1954: K2, the world’s second highest mountain, is conquered by an Italian expedition led by Professor Desio; Pakistan defeats England by 24 runs at Oval during its maiden tour of England.

1955: Pakistan International Airlines comes into being.

1957: President Iskandar Mirza lays the foundation-stone of the State Bank of Pakistan building in Karachi.

1960: Presidential Cabinet decides to name the new Capital as Islamabad; Pakistan achieved its first Gold Medal in 1960 Olympics, defeating India in hockey by 1–0 at Rome.

1963: First trade agreement is signed between Pakistan and China.

1994: Pakistan Television transmission gets access to 38 countries via satellite.

2001: Construction on the first phase of Gwadar Port begins.

2007: Pakistan and India sign an agreement aimed at reducing the risk of accidental nuclear war.

2009: The JF 17 Thunder becomes the first ever multi role state of the art fighter aircraft manufactured by Pakistan Aeronautical Complex, Kamra, and was added to Pakistan Air Force’s fleet.

2012: Sharmeen Obaid-Chinoy becomes the first Pakistani to ever win an Oscar at the 84th Academy Awards for the reconstructive surgery of acid attack victims, Saving Face wins for Best Documentary (Short Subject).

2015: Pakistan and China announced their intention to develop the $46 billion China–Pakistan Economic Corridor (CPEC), which in turn forms part of China’s ambitious One Belt, One Road. Gwadar becomes the link between the One Belt, One Road and Maritime Silk Road project. $1.153 billion worth of infrastructure projects will be invested into the city as part of CPEC. The city will also be the site of a floating liquefied natural gas facility that will be built as part of the larger $2.5 billion Gwadar-Nawabshah segment of the Iran–Pakistan gas pipeline project. 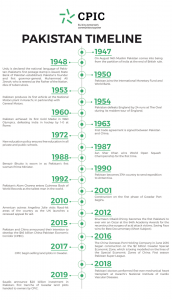