Why Invest in Pakistan and Gwadar

Despite being geographically close to India and Sri Lanka, Pakistan is quite unique with its own distinct culture and set of circumstances. With its vast green fields, improvement in security and it’s close, trusting and established relationship with China, it is in a fantastic position to capitalise on the huge amount of foreign investment that is pouring into the country right now.

Pakistan has the sixth largest population (just over 220 million according to UN data) in the world and interestingly, it is the 24th largest economy in the world in terms of purchasing power parity.

By 2050, it is predicted to be the 16th largest economy in the world, overtaking economies like Canada and Italy.

The Beauty of Pakistan

Other factors that define Pakistan include its younger population and it’s growing middle class, the fact that English is the lingua franca of the business community, and its highly evolved services sector that contributes 56% of GDP. Pakistanis are actually the biggest consumer spenders in Asia, so there is a lot of potential for foreign business.

Financially, production and labour costs are lower in Pakistan, so it offers a higher yield than surrounding countries for investors. Its stock exchange has actually been performing better than India’s in recent years and its GDP has risen for 5 straight years.

Pakistan is expected to continue to grow as it receives further foreign investment particularly from Saudi Arabia which is emerging as a valued supporting partner.  In the first nine months of the current fiscal year, Foreign Direct investment in Pakistan improved 4.4% to $2.09 billion from $2 billion in the same period last year.

The business sector in the UK has recently announced £100 million investments in Pakistan including oil & gas and other sectors. In early 2019, Saudi Arabia plans to spend $10bn for a new oil refinery in Gwadar.

It’s clear to see why China’s President Xi Jinping believes Pakistan has the potential to be the next Asian Tiger and here at CPIC we are proud to be at the forefront of the Emerging Pakistan growth story.

PAKISTAN - INTO THE FUTURE

The China-Pakistan Economic Corridor is seen as a bold move to further Pakistan’s economic outlook. The joint venture between China and Pakistan aims to not only bring prosperity to Pakistan but also ensure its future by bringing in local jobs and investment. The population is expected to grow and demand on residential property would also increase, not just in Gwadar but other important regions.

With Gwadar being the focal point of the country in terms of trade and tourism, no wonder people are sitting up and taking notice of Pakistan.

Pakistan is clearly becoming safer and governments around the world have acknowledged this. Recently the UK Foreign & Commonwealth Office took steps to downgrade Pakistan’s threat level and even allowed a high profile royal visit to take place in 2019 for the Duke & Duchess of Cambridge. It is now common to find that many places in Pakistan are safe for locals and foreign visitors alike.

Technology is seen as a massive growth area in Pakistan. The ambitious CPEC initiative is providing much of the infrastructure upgrade in this sector. Fiber-optic cabling is being placed into the ground to supply powerful digital connectivity to the Pakistani population. The ultimate goal is to provide much of the Baluchistan and Gilgit-Baltistan regions with super fast internet.

No matter what the previous preconceptions of Pakistan were, any negative views are gradually being dispelled. CPIC have been also doing their part to rid of the undeserved bad image that Pakistan has unfairly got over the years. CPIC’s Changing Perceptions tour which successfully ran for three tours went to many locations in Pakistan and meeting the local people along the way. 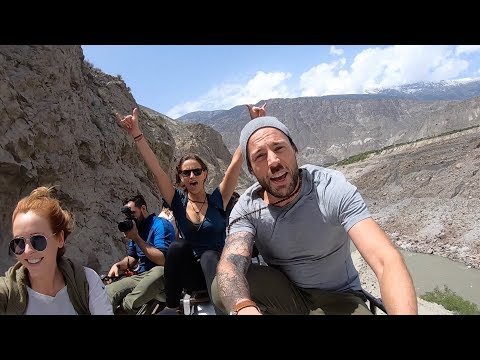